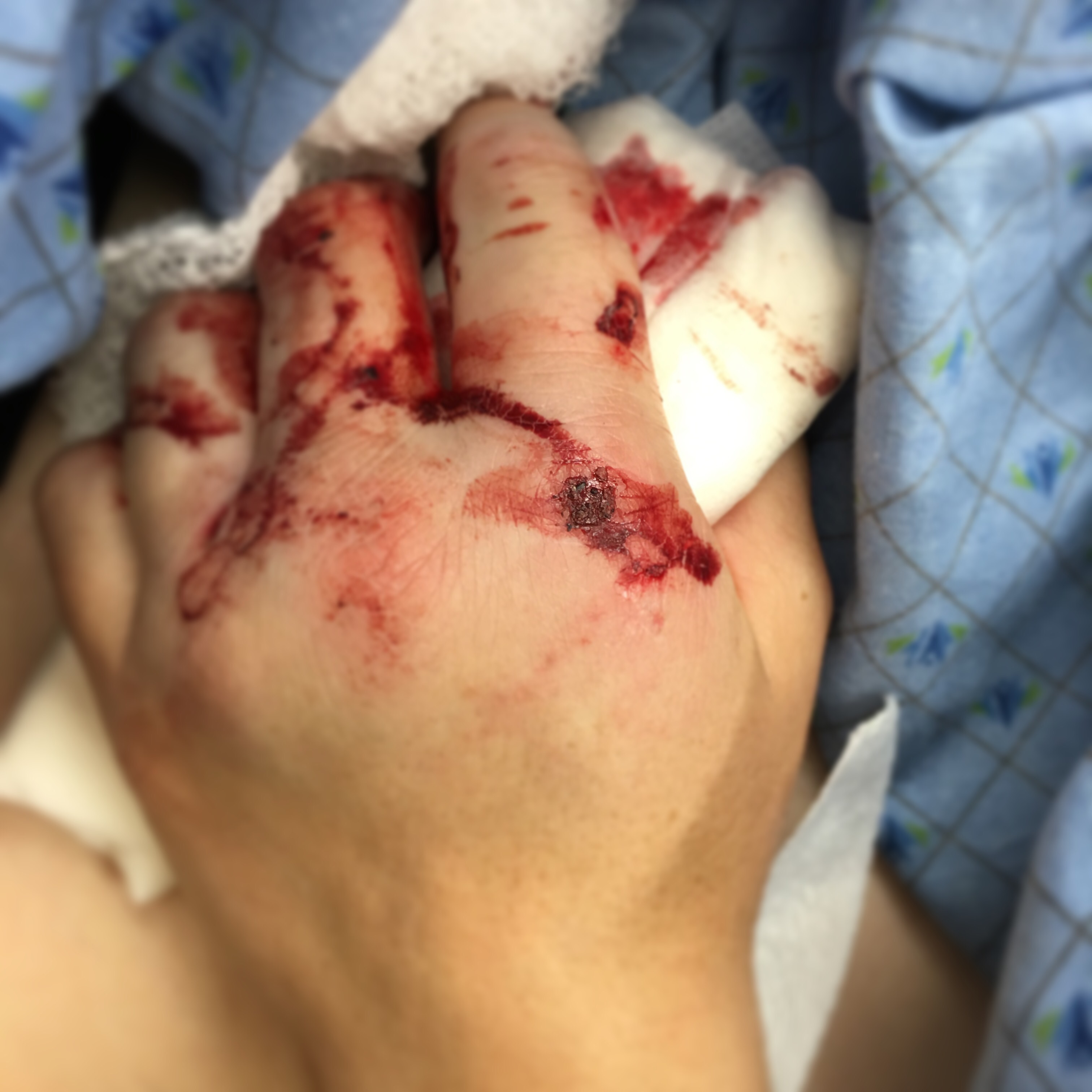 I’ve wanted to write something like this for a while, but I haven’t had the right frame of mind, or haven’t known quite what to say, or feared saying something that might interfere with the wheels of justice, or something. But I’m ready. (Ali is preparing something of her own, and given that she will speak at the defendant’s sentencing in about a month, her piece is actually worth something. My ramblings and incoherence, on the other hand, are just for kicks and giggles.)

We took bikes on our honeymoon, and we’ve ridden regularly since then (I’ve been riding a road or mountain bike off or on for something like 20 years [at Deer Valley in the mid-90s, and anywhere else I could find back before there was an actual bike trail between City Creek and Bountiful], and consistently for the last 14+). Even when she was 7, maybe 8, months pregnant, Ali would pedal away on her trainer in my home office, trying to keep up her fitness as long as she could before some mandatory recovery time.

Since that first trip as a married couple, our vacations for the last 14+ years have managed to include bikes–borrowed when we flew across the country from Ohio to ride in Orange County; carried on top of the car when we spent our 10 year anniversary in Aspen; broken down and packed into luggage for the annual pilgrimage to Ohio; rented posthaste when we reached a port of call in Alaska; and so on and so forth.

Our kids, whether or not by choice, have been grafted into the hobby. The boys have wanted to ride Emigration Canyon for years, and I finally took Noah when he was 10–what I consider a young age for a ride like that. He hasn’t stopped talking about it since. In fact, he mentions it so frequently, that it wasn’t too long until 8 year old Logan followed suit. Logan hasn’t stopped talking about it either, and Miles (all of 6 years old) is confident, no insistent, that he could do it too (and given his track record, I’d be a fool to doubt him–the kid taught himself how to ride a bike, sans training wheels, at age 2, and his older brothers have struggled to keep up with him ever since).

Bikes are what we do and form a huge part of our identity, both individually and as a family. When we looked at neighborhoods considering a move, we rejected many of them *solely* because we couldn’t bike or walk from home to the grocery store, school, library, park, etc. Yalecrest is nearly unbeatable in that regard, and it’s something we’ve come to value tremendously. For us, bikes are a means of transportation and recreation, of course, but bikes are also part of who we are.

May 12, 2016, at about 10:30am, changed that. I’ve had my fair share of crashes (some my fault, some not). I’ve been hit by cars twice in the last three years. I haven’t cared. I mean, I’ve been angry about it and frustrated that we don’t treat two to three ton vehicles with more care, but being hit hasn’t deterred me from riding.

But that morning, when I listened to a voicemail telling me that my babies’ mom had been in an accident, followed by my rushing to pick up my four year old from preschool, followed by happening upon the scene of the accident from which my wife had recently departed, only to learn that she was hit by a drunk driver who had an empty vodka bottle on the seat next to him, well, it changed my perspective on riding a bike. And I also found a new sort of anger I didn’t recognize before.

What’s the point? I mean, really? I’m not particularly talented, I have horrible genes (sorry mom and dad, although I guess you should be sorry too!), and I don’t have as much free time as I would like. But, I was willing to suffer and enjoyed competition, even when that meant being embarrassed in a race. But as an old man, what was really the point of flogging myself in the dark (often starting before 5:00am) or for 5 to 9 hour-long rides on a Saturday? Would I be better served spending some of that time with the kids doing something they wanted to do, with me having the energy to do it?

I miss it, sometimes a lot. I haven’t stopped riding, but a typical ride is now a mere hour long. Sometimes, I only squeeze in 30 minutes just to keep up the habit. No more 5:00am to 8:00am weekday rides (frankly, I’m not sure that I could pedal for 3 hours even if I wanted to). I spend more time riding trails, and again more time running, trying to hold on to the last vestige of aerobic conditioning I’ve developed over the course of years and lost over the course of weeks.

I think the thing that makes Ali (or at least me) the most frustrated isn’t the physical pain (going on 5 months), mental pain (will it ever go away?), or anything like that–I think it’s the fact that we feel robbed of an important part of our identity. We recently stayed in St. George–one of our favorite places on the planet to ride. The boys and I took our bikes, and we didn’t pedal a single stroke on them. They went from the car rack to the garage when we arrived, then from the garage to the car rack when we left. That’s a shame.

If indeed time heals all wounds, then I assume that at some point we’ll rediscover our love for it–but I just don’t FEEL it. You know? And with what we’ve invested in cycling both in terms of dollars and in terms of time? Well, that’s a shame too.

– The defendant’s blood alcohol content was 3.5 times the legal limit when he hit Alison–so drunk that he was a sip from being unconscious. At 10:30am on a Thursday.

– He drove past Evergreen Junior High, Evergreen Park, and the Millcreek Recreation Center (and who knows where else) before he hit Ali and came to a stop. Ever been by those areas on a weekday? If not–hold your kids tight. The area is crowded with kids–some at school, some on their way to/from, youngsters at the park, parents and kids headed to/from the library, etc. I sometimes have to keep myself from imagining what could have happened.

– It wasn’t his first rodeo. Granted, about three decades had passed since his last DUI, but still. Not a great thing to have experience with.

– The defendant pleaded guilty to a 3rd degree felony, the maximum possible, and will be sentenced in November.

– The federal government doesn’t make it a habit of employing felons, and thus the defendant, formerly a federal employee, is now in forced retirement.

Ali is not a vengeful person, and I don’t think that I am either (although I’m certainly not on Ali’s level). I believe in the rule of law and that a consequence should be affixed to each action. I also believe in forgiveness and that forgiving a villain can bring peace to a victim. You may feel the same, or you may think I’m nuts. I’m fine with that.

It wasn’t until we got a call from the assistant district attorney that we actually had to grapple with those issues in a meaningful, concrete way. Theoretical discussion is fine (and part of the healing process), but when the prosecutor asks you what you’d like to see happen, and at that point realizing that what you say will have real consequences, it’s quite another thing entirely.

We’ve asked ourselves all sorts of questions. For example:

– How fulfilled is someone who is completely smashed at 10:30 on a Thursday morning? I feel badly for those who don’t feel fulfilled by their relationships, or their hobbies, or their employment, or just the amazing valley in which we live.

– Is jail time a deterrent (I don’t think so, for many reasons I won’t get into)? Or should jail time be punitive?

– Is it fair that his spouse and family suffer for his actions (more than they already have)?

– On the continuum from “slap on the wrist” to “spend five years in the clink and be forced into bankruptcy,” at what point does punishment go from motivating change to feeding a cycle of depression (and consequent potential damaging behaviors) that only make change more difficult and less likely?

– How sincere is the defendant’s remorse? Does it matter?

– By not seeking the maximum possible criminal and/or civil penalties, are we doing a disservice to others–both those who might in the future be affected by this particular defendant’s potential actions as well as by the chance (if any) that a lack of extracting the maximum penalty might not serve presumed deterrence effects for others who might do similarly in the future?

– How do you economically quantify hours, days, weeks, months, and years of pain? Multiple surgeries? Impaired limb function? A summer (few they are whilst the kids are young) hearing about or watching your kids do the things you love to do but can’t participate in? Emotional wounds presenting at unexpected times, or in unexpected ways, and that you can’t fully understand yet?

– How do you make up for the fact that your short term memory has been so affected that your husband actually now wins an argument from time to time (“Where is my book?” “You put it on the table 30 seconds ago, literally.” “No I didn’t.” “Walk over there and look.”)

I’ve tried to help Ali understand that her input into the criminal process is not, or at least should not be, a burden in which she must decide the defendant’s fate. The defendant’s fate was in his own hands, and it is now in the hands of a trier of fact. Her input is important in that process, but whether or not the defendant is convicted is not her burden, and she should feel no guilt at the consequences imposed if she perceives them to be too harsh or too lenient. It’s easy for me to say. It’s not easy for a victim to appreciate.

The ride has been interesting, and it is not over. But sentencing will be an important milestone as we move forward and try and put the issues behind us and can focus on Ali being who she wants to be and doing what she wants to do.

Until then, next time you drive down the road, please drive sober/drive safely/put your phone down, and please give a cyclist a little space (we only take up a few feet). You may lose five (or even 15!!) seconds of time, but you’ll potentially save the cyclist a lot of pain and suffering, not to mention that of those waiting at home for her/him. You don’t understand the battles one is facing merely by looking at her/him.