Our head coach and I stood in a parking lot after a 14 hour day at the races and shared stories of some of the incredible things we saw and heard throughout those long, dusty, sometimes frustrating hours. The head and assistant coaches hear about all sorts of amazing things, but the rest of the team generally doesn’t enjoy the benefit of the same perspective.

Type A personality, lawyer, dude–whatever the title, it’s probably a little disorienting to see me standing on the side of a trail weeping at the greatness I’m privy to witness. The resilience, compassion, and greatness these modern teens display give me a glimpse of a hopeful future.

These stories deserve to be memorialized–to recognize the greatness in kids who are doing their best but perhaps not meeting expectations, who realize there is more to life than race results, who have perspective and wisdom and goodness beyond their years. So, here are some of the many things I’ve seen this year as a NICA coach–I’ve seen more, and yet more have gone unnoticed. These amazing humans don’t ask to be recognized, but they deserve to be recognized even if simply on some obscure blog with little traffic.

Snowbasin is, perhaps, our most challenging course–at elevation, steep, rocky. Most of our kids dread the course, and most of our coaches dread the course more than the kids do. Our team saw a few podiums today (two JD women and a single HS woman). I didn’t spend as much time ugly crying as I did at Price, but many on our team achieved greatness.
– Pre-race nerves aren’t uncommon for E.S., and there are few things she hates more than racing a bike at Snowbasin. But she raced anyway. I couldn’t have been more happy for her than when I saw her on the upper dirt road, looking much stronger than she expected. E.S. did something difficult and unpleasant and became stronger for it. We should be more like E.S.
– B.C. has scant interest in MTB and had no interest in racing. But when he heard a friend express concern about the difficulty of the course the night before the race, B.C. decided it was time to race his bike for the first time to support his friend. Not only did B.C. support his friend, he finished strong and had a great result. We should be more like B.C.
– N.C. was still unable to race (see the Price report, below), but he again spent 14 hours at the race course cheering on teammates and would-have-been competitors. He again returned home more hoarse than most coaches.
– I.T. came sprinting through the finish when two competitors from another team pinched him out and took out his front wheel. I.T. landed face-first in the gravel, but he wouldn’t let that keep him from finishing. He picked up his bike, ran through the finish, and went directly to the medical tent. He needed more care than the first aid staff could provide, so he was rushed to the hospital for stitches and gluing. Despite the pain and rush, he took time to reassure and motivate his teammates and appoint a deputy captain to act in his absence for the remainder of the day. We should be more like I.T.
– A newer rider on the team struggled with his first team practice as he worked to learn the basics of how to balance a bike, how to pedal, and how to brake–it took a while before he was ready to advance to mountain bike trails. We coaches were content to have him on the team, but we didn’t have any expectation that he would be interested in racing a course like Snowbasin. He completed the Snowbasin race without the need for any assistance (and had a good result on top of it)–something that wouldn’t have been possible without his hard work! He developed grit and resilience through MTB. We should be more like that.
– G.P. is a freshman racer whose goal is to qualify to race at state champs. As he was making his way down the descent on his first lap, a competitor made an unsafe pass, causing G.P. to crash and his pedal to gash his shin. Despite the pain and frustration, and having another long and arduous lap in front of him, G.P. kept racing and had a great result. He wouldn’t let pain and disappointment derail his goals. We should be more like G.P.
– D.B.‘s result at Price (see the Price report, below) meant he started last at Snowbasin. Despite starting last, which is even more difficult on a course like Snowbasin, D.B. had a great result. When his race was over, however, his race day was not done. He gathered teammates to travel back to the course to cheer for racing teammates. We should be more like D.B.
– L.C. had a worse starting position than he’d have liked (see the Price report, below), but he pre-rode the course nearly a dozen times and was ready to race. He moved into 6th place at the top of the first lap, catching a former teammate as they made their way down the descent. L.C. hit a root, went over the bars, had the wind knocked out of him, cracked his helmet, and lost too much skin on his shoulder, back, hip, and arm. After laying in the dirt for nearly three minutes, he got back on his bike and finished his first lap, continued to his second, and finished his race. L.C. finished in 16th place–not what he was capable of, but losing only a single spot from where he started. “I wanted to quit after my crash, but I remembered what you said after the Price race.”
– We had an unreasonable amount of kids stick around to watch the last race of the day and to watch our single HS podium qualifier stand on the podium. They’re true teammates.
We’re in the midst of greatness. 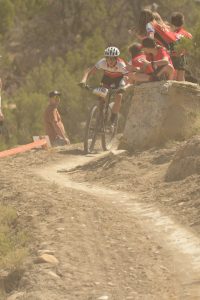